• 1834: Lord Brougham, former British minister of Finance discovers the little town of Cannes. He decides to make it his winter home and builds the chateau « Eleonore Louis ». The London hi society gets attracted to the little city.
• 1848: Alexandra Feodorovna, the wife of the French consul in Moscow also falls in Love with Cannes. She attracts part of the Russian aristocracy towards the small city in the south of France.
• 1863 April 10: Cannes gets interconnected with the railway line PLM (Paris-Lyon-Méditerranée). From the gare de Lyon in Paris the trip takes 22 hours and 20 min.
• 1870: Building a Villa or a Palace on the Côte d’Azur becomes fashionable among the rich and famous of the times. The hi society wants to spend the winter in the Nice / Cannes region.
• 1883: La Croisette et de l’Hotel de la Plage (located on the present spot Carlton) are still a quiet walkway along the Mediterranée. 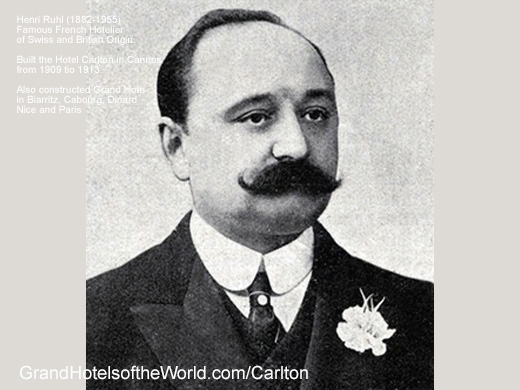 • 1900: The British businessman Henri Ruhl (1882-1955) settles on the côte d’Azur and starts an exceptional career in the Hotel industry. He also builds the Hotel Ruhl in Nice.
• 1907: Henri Ruhl becomes a French citizen. 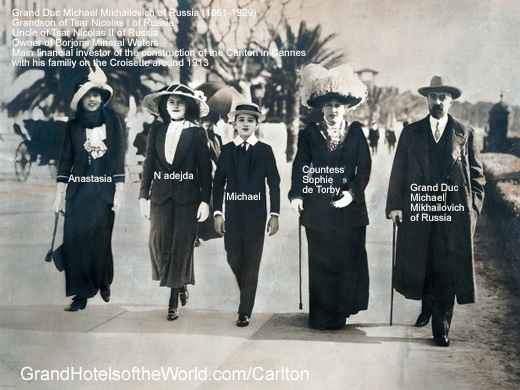 • 1908: Acquisition of the grounds on 58 Boulevard de la Croisette. Henri Ruhl finds different investors, the most important is the Grand Duke Michael of Russia, oncle of the last Tsar, Nicolas II.
• 1909: Start of the construction of first part of the Carlton under the architect Charles Dumas (1863-1938)
• 1911 January 30: Grand opening of the Carlton Hotel Henri Ruhl chooses the name « Carlton » which in Scandinavia means « free man ».
• 1911: Acquisition of the neighboring « Hotel de la Plage ».
• 1913: Opening of the entire Carlton building. The Carlton only knows one year of the « Belle Epoque ».
• 1914 August 1: Beginning of World War I.
• 1917: With the Russian Revolution the Hotel loses an important part of it’s wealthy clients.
• 1919: Business is very bad. The Carlton is for sale for 1 million Francs. 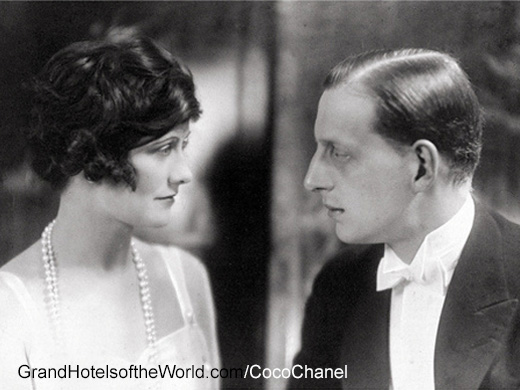 • 1920: The fashion designer Coco Chanel stays at the Carlton She is in Cannes with her boyfriend the Grand Duc Dmitri Romanov, a nephew of the Grand Duc Michel Romanov (financier of the Carlton). They organize a meeting with the exiled franco-russian perfumer Ernest Beaux. The result is the perfume Chanel N°5.


• 1922 January 4: Birth of the Société des Nations (today the United Nations) in the grand salon of the Carlton. 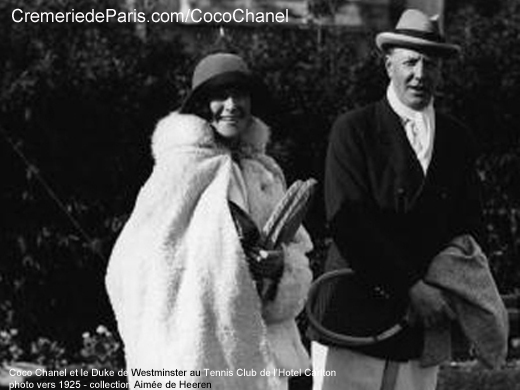 • 1925 Bendor, The 2nd Duke of Westminster
and England's wealthies man spends a lot of time on the côte d'Azur. He spends his time between his yacht « The Flying Cloud », Monaco and Cannes. His passion is to offere extravagant presents to beautiful women. in Monaco he meets Coco Chanel who becomes his new girlfriend.
• 1930 First Summer Season.
• 1938 May:
Bendor, the Second Duke of Westminster is overwhelmed while seeing Aimée de Herren leave the Carlton.
• 1939 September 1: Louis Lumière, inventor of the cinema presides the first Firm Festival.
• 1940 June: the Hotel closes due to WW II.
• 1940 Italien Soldiers of Mussolini occupy the city of Cannes.
• 1940 August 24: American Soldiers liberate the côte d'Azur. Line Renault sings for the US soldiers.
• 1946 Reopening of the Film Festival.
• 1953 July 19th: Death of the Côte d'Azur's most glamorous guest, Bendor, the Second Duke of Westminster.


• 1954: The famous British film maker Alfred Hitchcock starts the moovie « To catch a thief » with Grace Kelly and Cary Grant. The film is relesed in 1955.
• 1956 April 19: wedding of Grace Kelly with Prince Rainier of Monaco.

• 1982 The famous American Hotel Chain « Intercontinental Hotels Corporation Group » buys the Hotel.
• 1984 October 10: the Hotel gets listed as a the Historic Monument

• 2011: April 12: Toufic Aboukhater, an investisseur from the Lebanon buys the Carlton and 6 other Hotels owned by the Morgan Stanley Bank. The amount of the transaction is 450 millions Euro. The Carton remains under IHG management.


• 2012: January: Ghanim Bin Saad Al Saad, a private investistor from Qatar buys the Carlton for a non disclosed amount. The acquisition is part of a series of investments done in France by different Quatar Citizens, lige the Headquater of the HSBC on the Champs Elysees, the Conferences Center Avenue Klebert, reconverted as the of Peninsula Paris and the Hotel Lambert, former residence of the Baron Guy de Rothschild.
• 2015: July 21: Fireworks during the Festival d'Art Pyrotechnique.

According to the legend the two domes represent the breasts of the dancer Carolina Otero, called la « Belle Otero ».


0:53 min Teaser Video about the Carlton
by Intercontinental Carlton Cannes (2016)


1:06 min Teaser Video about the Carlton
by Intercontinental Carlton Cannes (2019)

2011 Cremerie de Paris was converted into a Pop Up Expo location.
While working on our Hotel pages we host the coolest Product launch events.
a little bit like a "Meeting Place of the World's most famous Brands".
Above video was made for a Pop Up Store imagined by Siemens.